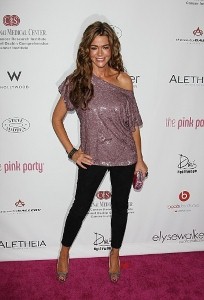 Hollywood actress Denise Richards has revealed how she is able to lose weight and keep the pounds off, as demanded by her role in the limelight.

The star of Wild Things and The World Is Not Enough, who is now 41, was pictured running in a park in Los Angeles wearing a pair of figure hugging jogging pants that have been taking Tinseltown by storm.

Many female celebrities have been photographed running in the jogging pants and Denise is no different, displaying the figure she has been famous for since bursting onto the scene in the 1990s.

The clothing is thought to work by increasing perspiration, though the mother-of-three ensured she stayed hydrated by keeping a bottle of water close by as she exercised.

Dessi Bell, developer of the jogging pants, said her aim was to create something that could be effective and popular.

She added: “So, that is exactly what we have done and we are so proud of the results. Happy calorie burning!”

Do you find that wearing certain clothing helps you to lose weight?