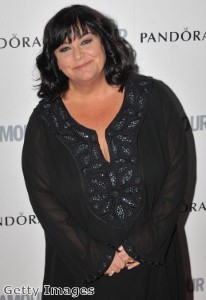 Dawn French has revealed how she changed her diet and managed to lose 4 st and slim down to a size 16.

She told Woman magazine that she cut chips from her diet and swapped them for healthy salads instead in order to achieve her weight loss.

Dawn went on to tell the magazine that “life is good” at the moment and that she would like to start doing more exercise by taking up Pilates classes.

The 53-year-old appeared at the Glamour magazine awards ceremony recently looking noticeably slimmer but still as smiley as ever.

She told Woman magazine that she is currently still single, following her divorce from fellow comedian and husband of 25 years, Lenny Henry.

Last month, another celeb – Ricky Gervais – revealed to the Metro that he maintains his new slim figure by getting to bed early each night and exercising every day for 55 minutes.

Has any celeb in particular inspired you to lose weight?