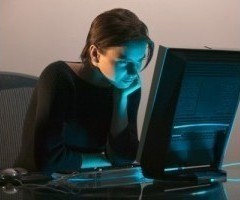 Women who are trying to lose weight quickly may find it harder if they regularly spend time in front of a computer, a study has shown.

Researchers from the University of Copenhagen studied two groups of women – one that was told to relax for 45 minutes and one that was asked to condense some text into a summary using a computer.

Those in the computer group burnt three more calories than the other group.

However, at a buffet after the task, the computer group consumed an extra 230 calories than the other study participants.

This was because the computer work made the women’s blood sugar levels fluctuate and caused their hunger hormones to increase.

“Working on your computer is sedentary and doing nothing increases your weight. But use of them also increases your appetite as well so there is a double whammy in effect,” the Daily Mail reports study leader Dr Jean-Philippe Chaput as saying.

Back in May, the National Obesity Forum suggested that women can control their weight by taking regular exercise breaks from their computers during the working day.

Does working at a computer make you feel more hungry?