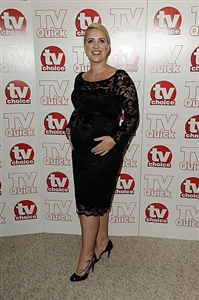 Singer Claire Richards has said she will not rush into a post-baby diet as she wants to enjoy being a mum first.

The former Steps star gave birth to daughter Daisy two moths ago and that this made her realise there is more to life than dieting, Now magazine reports.

"She realised that she was over-committing herself by trying to shed the pounds too quickly after the birth. So she’s decided that the diet can wait while she bonds with her new daughter," a friend of Claire’s told the magazine.

In 2008, Claire lost an amazing six stone and released a fitness DVD to help other women follow in her footsteps.

Since then, however, the blonde has put some of the weight back on and admitted to the magazine that cake and Haagen-Dazs were partly responsible for her downfall.

Actress Hannah Waterman, on the other hand, is one celeb that has been working hard to keep off the pounds.

Do you think women are pressured to lose weight too soon after giving birth?