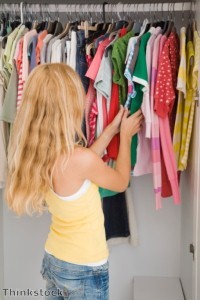 Many women in the UK are hoarding pieces of clothing in the hope that they will one day be able to fit into them again once they have lost weight.

This is the key finding of a new survey undertaken by TK Maxx and Cancer Research UK, which revealed that one in ten females are keeping clothes even though they can never wear them.

Jeans and occasionware were the most frequent items of clothing which are stuffed into a British woman's wardrobe, with 36 per cent of women saying they cannot bear to throw either item away.

Tops (28 per cent) and skirts (23 per cent) are other garments which females across the country like to hoard.

When asked why they like to keep old clothes, two thirds of the respondents replied that they feel that they will one day fit into the clothes once more.

Females could drop a dress size quicker should they participate in weight loss exercises with people who have similar aims rather than going it alone, a new Brown University study suggests.

How packed is your wardrobe?