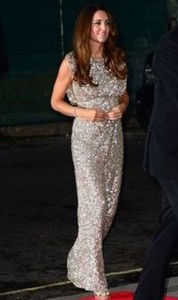 Ideal Weight surveyed 1,000 UK mums and found that more than one in five women envy the Duchess of Cambridge’s figure the most, thanks to her healthy weight loss since giving birth to Prince George in July.

Curvy, womanly figures rate the most highly, with Beyoncé, Kelly Brook and Nigella Lawson all in the top five. Singer Adele, who gave birth to son Angelo last year, came eighth on the survey of most desirable famous female bodies.

The results also revealed a regional divide, with mums in London preferring the more athletic physiques of Jennifer Aniston, Gwyneth Paltrow and Madonna. Those in the north west favour a more curvaceous figure, with Kelly Brook and Beyoncé most popular. In Wales, the majority of mums admire curvaceous celebrities like Adele.

The research also suggests that 27% of mums no longer admire celebrity bodies, with nearly two-thirds saying that looking good for themselves is most important when losing weight.When questioned on their ideal weight, one-fifth of mums said the’d like to be 7lbs to a stone lighter than they are now, with 18% wanting to lose more than 3st.

Top eight most desirable famous figures, according to the poll: