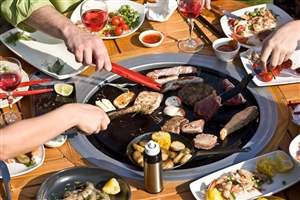 The average Brit estimates that they are carrying an extra stone in weight, recent research has revealed.

Commissioned by Yakult, a survey asked people about their exercise habits and diets.

Almost a quarter of those quizzed said that the heat of the summer had caused them to throw their fitness workouts out of the window and replace them with barbeques and sessions in beer gardens.

Some 14 per cent said that they had consumed more food and drink this summer due to the World Cup.

The study coincides with the launch of Gut Week, a campaign that aims to raise awareness of the importance of good gut health.

Earlier in the year, Closer magazine's diet gurus advised people to take their own low-fat food when visiting friends for a barbecue.

They advised them opt for a lean meat like chicken or turkey, rather than sausages and burgers, which are loaded with saturated fat.

Did you put on weight over the summer? How do you plan to lose it?