Adele sheds a stone – and plans to lose more 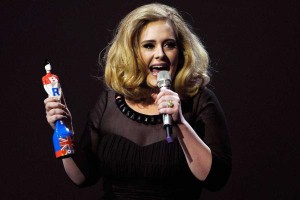 Music superstar Adele has reached the milestone of shedding 14 lbs in her bid to lose weight, and plans to continue dropping the weight on her quest for a svelte frame, it has been claimed.

According to a source close to the singer, Adele and boyfriend Simon Konecki have embarked on a fitness regime which has led to very tangible results so far.

As well as giving up smoking, the 23-year-old singer has been trying out new exercises and has also discovered Pilates, the insider revealed to the Daily Mirror.

The singer, who picked up six Grammy Awards earlier this year, is currently taking a break from singing, in order to rest her vocal chords after surgery late last year.

And, it seems the time off is enabling her to hit the gym and trim down in preparation for her comeback later in the year.

"Adele has found so much more energy now she's quit smoking. She really wants to get healthier, now that she's halfway there. She had always been curious about taking up Pilates but until recently there just hadn't been any time," the source told the publication.

After her Grammy success, the fashion designer Karl Lagerfeld infamously stated that she though Adele was "a little too fat", prompting the singer to say that she would never lose weight for anyone but herself.

Has Adele's weight loss inspired you?