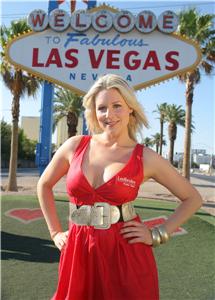 Abi Titmuss has been working hard at an exercise boot camp in order to lose weight quickly in time for her appearance at the Edinburgh Fringe.

Pictures of the former glamour model attending the women-only GI Jane Bootcamp in Bexleyheath, Kent, appeared in the Daily Mail.

In the photographs, Abi can be seen jogging and doing sit-ups on a beach as well as completing toning routines using an exercise ball.

At the Edinburgh Fringe, the ex-girlfriend of John Leslie will play the lead role in John Godber’s rugby play Up ‘n’ Under.

“It’s been my dream to perform at Edinburgh. That sounds really contrived, but it’s iconic, it’s legendary. It’s been one of the boxes that I’ve wanted to tick in my acting career,” Abi said.

Earlier this year, Rich Leigh, founder of Fat Free Fitness, advised women that no amount of sit-ups will get rid of excess stomach fat and suggested that to do this, they need to adopt a healthy diet and an active lifestyle.

Abi is losing weight for a new acting role, what’s your motivation?