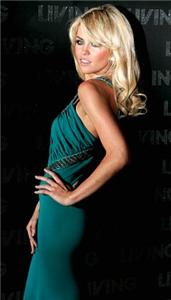 Abbey Clancy has revealed that she lost 5lb while she was in India by eating curry three times a day.

The underwear model ate the spice-rich diet while she was filming for a TV show which sees her crossing the Thar Desert on the back of a camel.

She told new! magazine: “We’d have curry for breakfast, lunch and dinner. After a few days we craved it and couldn’t wait for our brekkie.”

The 24 year-old, who is engaged to English football star Peter Crouch, went on to say that the trip was “the best experience I’ve ever had”.

Abbey explained that she left India weighing 8st 7lb – 5lb lighter than when she arrived.

When it comes to herbs and spices, scientists from the Miguel Hernandez University revealed last month that cloves are the best antioxidant spice as they contain high levels of phenolic compounds.

The researchers explained that, as well as being beneficial to health, antioxidants also increase the life span of foods.

Would you be able to eat curry three times a day if it meant you lost 5lbs?