A diet rich in tomatoes can lower prostate cancer risk by a fifth, claim scientists 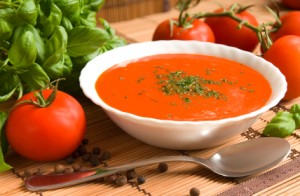 According to new research, men who eat a tomato rich diet can lower their risk of developing prostate cancer by almost a fifth.

A team of scientists compared the lifestyles and diets of 1,806 men aged between 50 and 69 who had prostate cancer and 12,005 cancer-free men.

Researchers at the Universities of Bristol, Cambridge and Oxford found that men who ate a higher amount of selenium, calcium and lycopene had a lower risk of developing prostate cancer.

Tomatoes and food products found to contain the fruit were shown to be the most beneficial in preventing the disease.

Men who consumed 10+ portions of tomato-rich foods per week, including tomato juice and baked beans, benefited from an 18% reduction in the risk of developing prostate cancer.

This is thought to be due to lycopene, an antioxidant which fights off toxins that can cause DNA and cell damage.

Vanessa Er, from the School of Social and Community Medicine at the University of Bristol and Bristol Nutrition BRU, led the research.

She said: “Our findings suggest that tomatoes may be important in prostate cancer prevention.  However, further studies need to be conducted to confirm our findings, especially through human trials.  Men should still eat a wide variety of fruits and vegetables, maintain a healthy weight and stay active.”