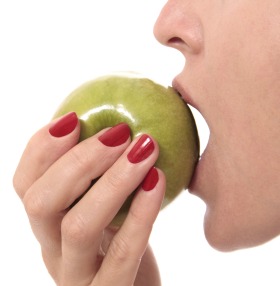 Greek yogurt is low in fat and sugar, yet has twice as much protein as other yogurts, which takes longer to leave the stomach and will keep you satisfied for longer. The body also burns more calories digesting protein than carbs, which will give your metabolism a boost.

Studies suggest cinnamon can help stabilise your blood sugar levels and lower high blood sugar levels, which can ultimately lead to increased storage of fat by the body, increased appetite and sugar cravings. Stir some into your coffee, tea, or sprinkle over your morning breakfast to add flavour without the calories.

If you like the benefits of green tea, then you’ll love Matcha, which has been proven to enhance the metabolism of fat storage and fat burning by increasing thermogenesis (the body’s rate of burning calories) from 8-10% to 35-43% of daily energy expenditure. Studies have shown that exercising immediately after drinking matcha green tea resulted in 25% more fat burning during exercise.

Apples have a high water content, with an added boost of fibre in the skin, which will keep you full longer. Have one before your main meal to help curb your appetite. Researchers found that those who had an apple before a main meal ate 187 fewer calories, because they felt fuller and less need to overeat.

Like other fruits, berries are high in water and fiber, which will keep you feeling fuller for longer. They’re also nice and sweet, which means a bowl full of berries instead of a mid-afternoon biscuit can help satisfy your sweet tooth for a fraction of the calories, and are loaded with antioxidants which will help keep your immunity strong whilst fighting illnesses like cancer and heart disease.

Eggs are packed with protein, good fats and less than 80 calories each (the same as a small banana!) that will set you up nicely for the day. Researchers have found that eating eggs for breakfast can cut your daily food intake by up to 415 calories. Their study, published in the Journal of the American College of Nutrition, also found that the high-quality proteins in eggs boost satiety, so you feel fuller for longer and have less need to snack.

Coconut oil is full of Medium Chain Triglycerides (MCTs). The good thing about this type of fat is that you can’t really store MCTs as fat and the body uses them for a rapid energy boost instead. It’s also nice in smoothies and great for your skin and hair too!