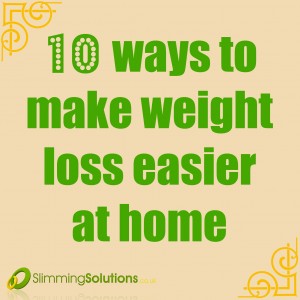 You don’t need to hit the gym, or even change out of your pj’s, to burn more calories. Make these super easy home improvements to start tipping the scales in your favour.

Install a dimmer switch in your dining room and turn on some Adele. A recent Cornell University study revealed that diners who eat meals under soft lights with relaxing music consume 133 fewer calories compared with those who eat in bright, noisy environments. Calm vibes encourage you to eat slower, so your brain has time to register when you’re satisfied.

The average woman puts on about a pound per year once she hits 25. Fight time by spending an extra hour a day standing, which burns about 40 calories more an hour than sitting does. Plus, standing doesn’t just use more energy, but it also keeps your metabolism humming. You can buy a special standing desk, or just park yourself at the kitchen counter as you send emails and browse the internet. If standing for an hour sounds too drastic, try taking a five minute walking break every half an hour.

Even if you’ve been having a lazy day, you can still burn more fat for basically no effort by adjusting your thermostat. A study in the Journal of Clinical Investigation found that when people were exposed to cold temperatures for three hours, they burned an extra 250 calories. Your body goes into overdrive to heat itself up, and extra calories are zapped in the process. You don’t need to walk around shivering to get the benefits, just lower your thermostat by two or three degrees.

Get your rear in new gear

“Worn-out clothes can hold you back and even keep you from going to the gym in the first place, while a flattering, comfortable outfit boosts your confidence and energy while you work out,” says body image expert Sarah Maria. So, have a clear out and get rid of anything with stains or stretched-out elastic. Then reward yourself with a few purchases that fill the gaps in your workout wardrobe. “A neon sports bra or a moisture-wicking tank may be motivation enough to run an extra mile or bust out a few more reps,” says Ramona Braganza, a Los Angeles-based celebrity trainer.

The key to a good night’s sleep could be snoozing to the sound of an overhead fan. “It helps you tune out disruptions. If you’re in a too-quiet room, any little sound, whether it’s the house creaking or your neighbours coming home, will wake you up,” says Lisa Shives, MD. And when you’re tired, you eat more! People who got just five hours of sleep a night put on almost 2lb over a five day period, according to a new study from the University of Colorado Boulder. If you don’t have a fan, invest in a white-noise machine or download an app such as White Noise or Relax Melodies.

Just as cold temperatures can help, a chilly shower can too. Cold temperatures activate brown fat, a type of fat that burns calories instead of storing them. Of course, a cold shower can’t replace exercise, but exposure to cold can create a small bump in metabolism that adds to weight loss in the long run. Only about 1% of body fat is made up of brown fat, most of it found in the neck and upper chest. Letting cool water run over this area while showering- or better yet, blasting it with cold water for a minute – may be the best way to stimulate this natural calorie blaster.

Clutter can increase frustration and compromise relaxation. So it’s no surprise that women who described their homes with words such as overflowing and messy had higher levels of the stress hormone cortisol, according to research from the University of California. Because ab flab contains more cortisol receptors, your body responds to chronic stress by storing fat around your waist.

If you love to bake but have a hard time controlling yourself around cookies, scoop the dough into an ice cube tray, freeze it, and pop the cubes into a freezer bag. Then, the next time a craving comes on, stick one in the oven! The freezer keeps cookies out of sight, and baking them individually forces you to practice portion control. Or, instead of whipping up an entire pan of brownies or a loaf of banana bread, mix up a microwaveable mug cake for one.

Keep two lightweight dumbbells next to your remote control. They’ll serve as a visual cue to squeeze in a few extra minutes of activity. Use them to crank out full-body exercises, like squats with biceps curls, or lunges with shoulder presses, during advert breaks and you’ll burn about 100 calories during an hour-long TV episode. By paying attention to your body instead of the TV, you’ll also be less tempted to raid the cupboards. Research published in Health Psychology found that people who watched TV adverts were more likely to snack.

The right plates can help you cut portions easily. Research shows that you pile more food on large dishes, so downsize from dinner plates to side plates. Another study from the Georgia Institute of Technology showed that serving white food on white plates prompted people to help themselves to 30% more. To avoid these results at home, invest in some brightly coloured dishes. Use them to serve rice and pasta, reserving your white plates for chocolate cake and ice cream.

By Jessica Girdwain for Yahoo.